St. Paul’s at 99 Ernest Street, Manly, has a long and vibrant history, a testament to the dedication and faith of many folk committed to following the path of the Nazarene carpenter and itinerant teacher, Jesus Christ.Anglican ministry in the Wynnum-Manly area began in 1890, with worship at Manly starting fourteen years later in 1904. Surprisingly, these first services were held in a converted cowshed on the farming property of a Manly plumber and his wife. The property was called “Wyvernleigh” and the plumber William Parker. Today the church and school of St. John Vianney occupy this site. 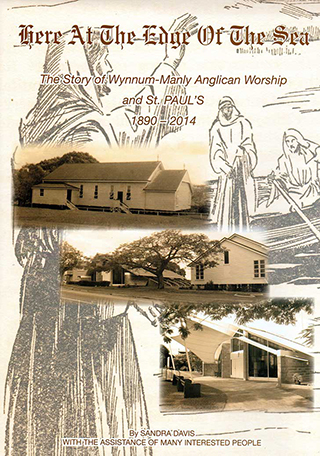 This early community was determined to establish a church in Manly, just as the Wynnum folk had established St. Peter’s in Wynnum in 1899. This venture had its first real breakthrough on March 9, 1912, when five lots of land were purchased from Mr. Harrie Lineker. The cost of this land, now the site of the 1914 hall, the 1964 church and the 1978 rectory: £120. This sum was raised by “straight giving”, to quote Reverend Herbert Hale and is a tribute to the determination of those destined to become the first parishioners of St. Paul’s, Manly.

The next step – to construct a timber hall – followed quickly: on August 8, 1914, the stump capping ceremony was conducted by Archdeacon Henry Le Fanu and the hall was dedicated by him to St. Paul on November 10, three months later. One hundred years later, this event was commemorated in a book, whose title author Sandra Davis selected: “Here At The Edge Of The Sea”, which is the name of St. Paul’s parish hymn. The book was commissioned by then Rector, Reverend Shan Vierow. This same year – 2014 – the golden anniversary of the present church, dedicated on November 22, 1964, by Bishop W.G. Hudson, was celebrated.

1932 saw several developments: the addition of a sanctuary, altar and chancel to the hall and also the construction of the vicarage, blessed by Bishop Dixon on January 20, 1934, and replaced by the present rectory in September, 1978.

Throughout the past 130 years St. Paul’s has experienced much change reflecting the cultural, economic, political and social changes in the wider community. These developments were especially prevalent during the 28 year tenure of Reverend Frederick Wilson (1952 to 1980).

In May, 1957, St. Agnes at Lota was opened, followed by St. Francis at Gumdale in November, 1959. Christ Church at Tingalpa, opened in 1868, forming our third sister church. Sadly, St Agnes was closed in 1994 and St. Francis in 2005. Christ Church, Tingalpa, is now the Pioneer Chapel and Cemetery.

In 1958 the first of our eight stained glass windows, the Ascension, donated by Mrs. Meagher, was installed in the front wall of the 1932 sanctuary. In 1964 it was reinstalled in the Lady Chapel of the present church.

St. Paul’s has always shown a willingness and ability to adapt to the times, just as Jesus did all those years ago. Whether the adoption of new technologies or green initiatives by the State Government’s Containers for Change program, Manly parishioners are always keen to innovate and make a contribution to the world we all share.

Reaching out to the community has long been the culture of St Paul’s. Over the years we have nurtured eighteen community ministries, of which nine survive today: S.A.I.L.S. (Sailing Adventures in Life Skills), Mission to Seafarers, Mothers’ Union, Bush Church Aid, Australian Board of Missions, Bush Ministry Fund, Operation Christmas Child, Anglicare (St. Luke’s Nursing Service until 2006, Spiritus till 2012) and NILS (No Interest Loans Scheme).

Yes, St. Paul’s has come a long way from its humble beginnings in a local cowshed!

The whole story of St Paul’s to 2014 is published in the book pictured above. Contact Us if you’d like to buy a copy.